India is one of the largest producers of agricultural produce has a vast fruit farming industry ripe for profits. Be it a small scale farmer or a large scale fruit producer; one is bound to make a decent living considering the demand for fruit in India, owing to the 1.3 billion inhabitants.

There are a plethora of fruits available for customers in India to choose from and consume. Still, the amount of variables associated with their plantation and by the end, harvesting is a significant thing to consider if one does decide to enter this business.

Here are ten of the most profitable fruits to grow in India, in no specific order.

Starting with bananas, which are high in demand almost everywhere in the world. They can be cultivated throughout the year, considering how they are consumed in every season.

Requiring warmth (15-35°C) and humidity, mostly grown in tropical states such as Gujrat, Tamil Nadu, and Karnataka. A typical 2500 m2 cultivated land yields an average profit of INR 78,000 per harvest. An adequate amount considering the ease of growing them and their demand.

Also consumed in the summers, papaya is mostly grown in the states of Gujrat, Andhra Pradesh, West Bengal, Orissa, and Assam. Commonly used within India itself, it is also exported, mainly to the Gulf States.

One advantage over mangoes is that the tree bears fruit in less than twelve months, and the yield is quite high per unit area, resulting in higher profits. 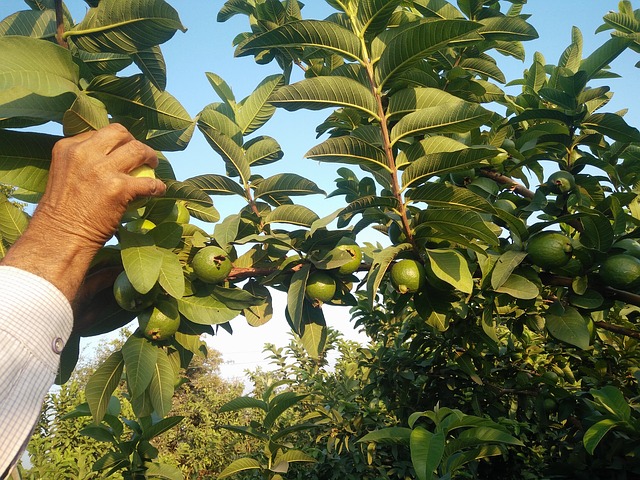 A tropical fruit thriving in rainy conditions, guavas are mostly found in the tropical/sub-tropical states of Uttar Pradesh, Orissa, Bihar, and West Bengal. The trees bear fruit after about 2-3 years of plantation, requiring constant care and effective management.

A yield of only around 40 kg per tree might not seem profitable at first, but with proper farming methods, it turn out a decent profit considering their exportability.

Grown and consumed mostly in the summers, mangoes are the national fruit of India. High in demand, they are used both in their ripe as well as unripe state, such as in pickles. Mostly grown in tropical/subtropical climates, mangoes require humid conditions and temperatures of around 25-30°C.

A single harvest yields around 10 tonnes from a 4500 m2 cultivated land with revenues ranging around INR 160,000. However, a preliminary wait of around three years after planting one tree for it to bear fruit makes this seem like a risky investment.

Being able to be cultivated at a broad temperature range of 13-37°C, they require watering at the initial stage only and thrive in soils with proper drainage. Selling at high prices all around India, and being exported to other countries, citrus fruits do seem a viable option.

However, they need some investment and care in their initial stage of growth.

Grown in the northern states of Kashmir, Uttar Pradesh, and Himachal Pradesh. Apricots require constant irrigation in the summers, although it is highly dependent on the kind of soil and weather.

The tree bears fruit in the fifth year of its plantation, maximizing yield after eight years of age, which can range anywhere around 15 to 25 tonnes per 10,000 m2 of land. Profits being limited to those who live in the northern areas.

Like the apricots, apples are found in the north as well, requiring temperatures of 20-24°C. Being one of the most demanded fruits all over the world, they are quite profitable to grow, considering a yield of 300 apples per tree. However, the profits have geographical limitations unlike other, tropical fruits on the list.

A plant that doesn’t require much care, it needs a dry, sub-tropical climate to survive, hence grown in the states of Rajasthan, Uttar Pradesh, Tamil Nadu, and Karnataka. The trees are capable enough to endure drought, requiring little to no irrigation, except in summers.

A healthy estimated yield of 45 tonnes per 10,000 m2 might seem like a lot. However, it takes around six years for the plants to bear fruit, resulting in a profit of INR 125,000 to INR 200,000, making them suitable for high-density commercial farming only.

Since almost all of the tree can be used in one way or the other, coconuts have proven to be a viable option for those seeking profits. Optimally grown in tropical conditions with temperatures around 27°C, it requires plenty of sunlight and even distribution of rainfall.

A lot of care, along with the geographical limitations, may throw off potential investors. However, the multipurpose tree makes it all worthwhile.

The reason grapes are sold at a premium throughout the world is their complicated cultivation process. Used in wines and consumed whole, they are highly in demand, not just in India, and can be exported. They are grown mostly in Tamil Nadu, Maharashtra, and Karnataka in temperatures around 15-35°C and little rainfall.

Their yield varies depending on the variety but mostly hovers around 5-10 tonnes per acre. This, coupled with a hefty price tag, make grapes one of the most profitable fruits.

15 Easiest Fruits to Grow in Pots